This page lists all the information, the exchanges and the products around the Agriculture of RO Haiti

Following Hurricane Mathieu, vegetation in the southwest area was devastated, including agricultural plots. It was difficult to access some of the affected area for several months. An overall vision of the agricultural situation was lacking. The purpose of the agricultural thematic activity was to see to what extent satellite imagery could offer a synthetic vision during the months and years following Mathieu. 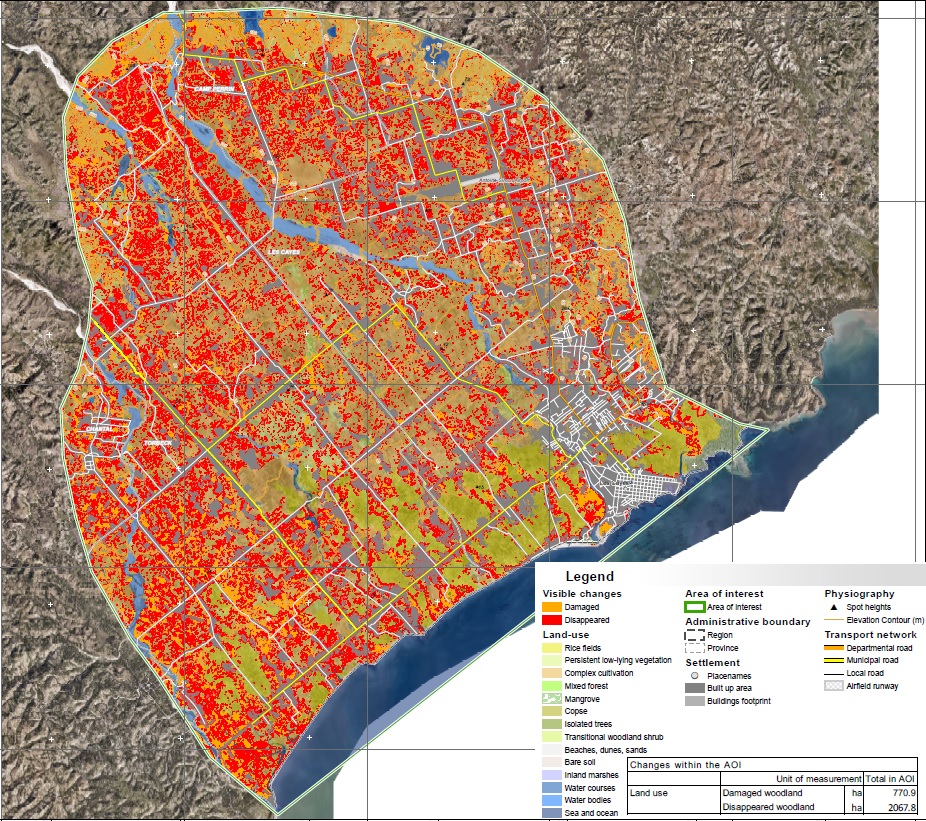 In 2017, a first agricultural product based on SPOT6/7 and Pleiades imagery was produced for the Les Cayes plain by iCube-SERTIT, with CNES funding. This product revealed that a few months after the event, farming had resumed on the plain. It was not possible, with the methodology used, to determine the type of crop, but a basic classification of land use by crop classes was developed. The monitoring carried out over the crop year revealed which plots were dedicated to agriculture. This first product in a limited area, presented during the first RO workshop in Haiti, allowed proof of concept for future work on a larger scale.

• 3 cartographic products of land use and its changes (Jérémie, Port-Salut, and Les Cayes)

The purpose of these products was to obtain a detailed map of agricultural activities in the selected areas of interest, obtained by classification of the images. The evolution of agricultural land was established, by comparing the current land use data and reference data, collected before the event. This product establishes the possible change in land use, their conversion, or even their abandonment. This product confirmed the good resumption of agricultural activities in the three zones.

In 2018, the World Bank launched a study on improving climate resilience and productivity in the Les Cayes plain. This study, carried out by the Société du Canal de Provence group, Génie Conseil Terro and Geograph'R associated with Telescop, was conducted until the beginning of 2019 and benefited from images acquired in the context of the RO.

In 2020, following the success of Copernicus EMS N51, a new activation was given to produce recovery mapping for the new area : Dame Marie and Pestel, but also update previous maps on Jérémie, Port-Salut and Les Cayes.

Analysis of Results and Outlook :

The maps produced and the corresponding files were sent to CNIGS, CIAT, and ONEV for printing and local distribution. A training session was held in December 2018 to train the experts in the production and operation of the product and the corresponding database. The methodology was presented, then practical work was carried out. CNIGS has also benefited from databases and cartographic products.

Without field data or very high resolution images it is still difficult to differentiate the type of crops, because the agricultural maps in Haiti is far too complex (subsistence farming, and not intensive). In addition, the plain of Les Cayes is very large and long-term monitoring would require significant resources.

RO agricultural activities converge with new activities from the World Bank and CNIGS, undertaken in Nippes and aimed at establishing a resilient agro-forestry program, over the next five years. This program benefits from RO achievements to establish the baseline at the start of the project, its cartographic products and also its expertise acquired to measure the impact of actions ("monitoring & evaluation").